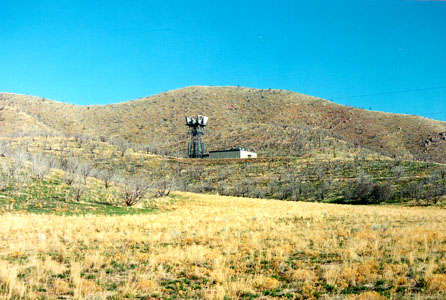 Tucked away in a canyon so small that it took me three trips to find it, is a small microwave tower with a big purpose.

This tower would take a microwave shot from Delta, Utah, and then throw it over the mountains to a site on Ephraim Peak, quite a distance (about 45 miles) away. From there, signals would proceed to near Green River, Utah, also a great distance by microwave tower standards, and then to near Moab, Utah, and across Colorado to form a secondary east-west leg of the AT&T Microwave network.

Signals would get to Delta from Scipio, or from a tower at Clear Lake, southwest of Delta. Scipio could get signals from the network leading from Salt Lake City Junction south, or from the Los Angeles area, or from Delta. Delta shot signals west, finally terminating at Oakland California, or east, through this tower.

A herd of deer was munching on the nearby sagebrush as I drove to the tower. The dead brush surrounding the tower reflects a range fire that hit this area two years ago. Predictably, it didn't touch this tower, which was built to withstand the cold war. This tower has now been idled, as well as the east-west circuit it once supported. The circuit roughly followed the route now taken by Interstate 70 (very roughly). 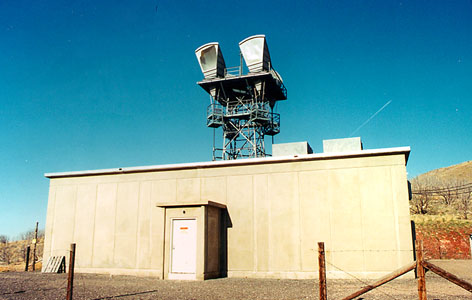 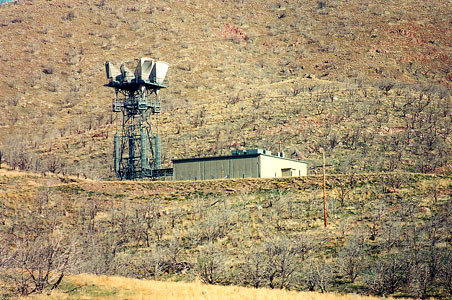 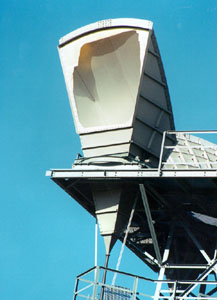 Closeup of a damaged microwave reflector.